When Did The Hot Air Balloon First Appear? History with a Twist

When Did The Hot Air Balloon First Appear? History with a Twist

Do you want to know when the hot air balloon was invented and who built the first one?

It’s fascinating to learn about the history of ballooning. Benjamin Franklin, a pair of French paper producers, and several farm animals are among the characters. The secret of aerial navigation was found in 1782, near the close of the 18th century, when Stephen (Jacques-Etienne Montgolfier) and Joseph Montgolfier conducted an inventive aerostatic experiment. Fire smoke hung over Parisian roofs for hours before dissipating into clouds — this idea for an innovation that transformed the world forever!

The first test flights of a hot air balloon

Stephen, the younger brother, learned that if they built a light paper bag and filled it with smoke or ash from their fire, it would naturally ascend into the sky. The Montgolfier brothers produced a lightweight paper bag in an oblong shape of around 40 cubic feet and used it to test their experiment in November of 1782 in Avignon.

Ride in a Hot Air Balloon for the First Time

On September 12, 1783, the day set aside for the first balloon flight presentation in front of the Royal Academy, a load of 400-500 pounds ascended. Unfortunately, the balloon was damaged by a sudden gust of wind caused by severe winds. A new hot air balloon with the same dimensions was ordered. The new balloon, which featured a wicker basket, was inflated in Versailles in the presence of King Louis XVI and the royal family. According to the French king, the first hot air ballooning passengers should be a sheep, a duck, and a rooster. The balloon was launched into the high atmosphere with these three living animal passengers and reached a height of 1500 feet. The animals safely landed at a distance of 10,000 feet from where they took off. The first official balloon flight went off without a hitch.

This was the first time a living creature ascended with the help of a balloon envelope. Another, 74 feet high and 48 feet in diameter, was built recently. M. Pllatre de Rozier offered to perform an aerial journey with this huge balloon. The lower end of the hot air balloon featured a 15-foot diameter hole. A gallery of wicker-work three feet wide was arranged and fastened around the opening, with a fence of the same material three feet high around the outer edge. Port holes were worked in the lower circumference of the balloon and immediately above the gallery platform to introduce fuel to the burner unit.

Jacques Alexandre César Charles and Nicholas Louis Robert launched a balloon utilizing hydrogen gas for lift and sand for ballast on December 1, 1783, only ten days after the first human-crewed balloon flight. The hydrogen balloon traveled 25 miles, and the pilots could stay in the air for 2.5 hours. Henry Cavendish created hydrogen in 1776 by combining iron filings and sulphuric acid.

The First Balloon Flight in the United States of America

On January 9, 1793, America’s first human-crewed balloon flight took place. It was piloted by John Jeffries and Jean-Pierre Blanchard and powered by hydrogen gas. Blanchard had only been across the English Channel for a year! President George Washington sat on the ground and watched the “first free flight.” The French military soldier safely landed the gas balloon on Gloucester County soil near New Jersey’s shoreline after ascending 5800 feet from the Philadelphia Prison yard.

The United States did not commission balloons or pilots for use in the war until the Civil War. Thadeus Lowe, the owner of a commercial balloon trip firm, spotted the clouds moving swiftly and thought he could fly from America to England if he built a large enough balloon. He talked to President Abraham Lincoln about using his balloons to help the North win the Civil War because he didn’t have enough money for the mission.

In the early twentieth century, August Piccard, a Swiss physicist, created a new form of the balloon in 1932. The balloon compartment was composed of a pressurized metal ball rather than a wicker basket, in which the pilots would climb. Piccard urged his buddy Max Cosyns to accompany him in a hydrogen gas balloon on this daring voyage into space. At the height of 52,000 feet, the balloon set a new altitude record. Captain Albert Stevens and Orvil Anderson achieved a difficult-to-beat record in 1935. Their helium balloon, the Explorer II, reaches 13.7 miles above the earth. This was a 20-year record. These pioneering stratospheric flights laid the groundwork for future space exploration. 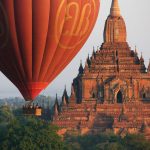